ICE HOCKEY at The RRRink

COVID-19 has changed all hockey programs at The RRRink. Please contact The RRRink manager, Team or association to get the latest news on how you can participate.

Scroll down to see more about each of our fun hockey programs.

The Youth Jr. Spartan program (our in-house hockey program) is for intermediate to advanced players in 1st through 8th grades. This program features four teams of skilled players who hit the ice twice a week. Practices are Mondays with head-to-head games on Thursday evenings. The Youth Jr. Spartans have specialized skills-training practices which focus on skating, as well as team practices, where coaches instruct the players about game play situations and strategies.

The Oregon State Hockey Association is the governing body for Amateur Hockey in the state of Oregon. The OSHA is sanctioned as an Affiliate of USA Hockey, the national governing body for Amateur Hockey in the United States. Oregon is fully committed to USA Hockey’s American Development Model (ADM) for player development, and seeks to provide playing opportunities for all ages at multiple levels of competitiveness. USA Hockey programs in Oregon include OSHA member associations and other USAH sanctioned programs. Click on the image to go to the OSHA website.

The Southern Oregon Adult Hockey Association (SOAHA) is a not-for-profit 501 c7 that works towards building a hockey community for all ages and levels. It began in 2010 with a rag-tag group of adult players wanting consistent and equitable hockey throughout the year. In 2011 the SOAHA became established as a 501 c7. Eight years later it has donated over $3500 to youth organizations and created the BHL – the Brewery Hockey League. The BHL is entering its 4th year and is always looking to expand. The SOAHA has over 125 members who at some point strap on the skates and pads to partake in one of the greatest sports on earth. 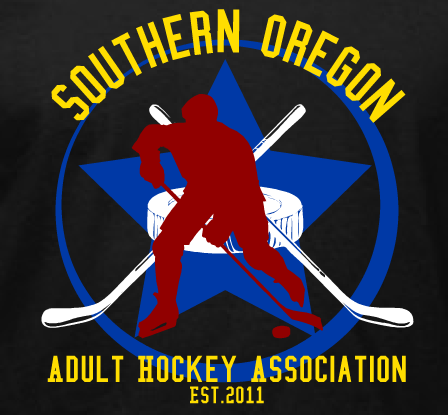 The Southern Oregon Spartans is a Tier II Junior A Hockey team located in the beautiful Rogue Valley in Southern Oregon. They are proud members of the Western States Hockey League, which is the largest Junior Hockey League in North America. WSHL rosters are made up of North American and International players. The season consists of 52 regular season games, plus exhibition and playoff games. Included in the regular season is the WSHL’s Las Vegas Showcase, a prominent exposure event for college and professional hockey scouts and recruiters. Last year, there were over 90 college coaches in attendance at the Showcase. The team is located in Medford, Oregon and enjoys the support of the local community and playing in front of sold-out crowds! Spartan fans help create an electric atmosphere during home games — one that is unmatched throughout the league. They are the most dedicated fans in the WSHL.